Covid and the Great White Way

"They say the neon lights are bright, on Broadway”.  That famous opening line from The Drifters hit song “On Broadway”, summed up everything about “The Great White Way” up until this past March.  Magic, suspense, excitement, all of it could be said while walking past all of the different Broadway theaters at any time, day or night.  For over 91,000 people, they called this area their home 6 days a week.  8 shows a week for every show on Broadway.  A vibrant industry.  A staple for any tourist visit to NYC.  A special date night for the locals in the tri-state area.  In short, a very special and amazing part of not only the New York scene but live entertainment as well. 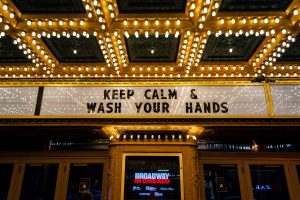 Enter March 12th.  A day no one in the industry would forget.  Complete shutdown of an industry that supplied so much for so many, due to an invisible virus that no one could see, but could and would feel if they caught it.  They said it’d last a month… It’s now the middle of October, some 7 months after initial shutdown, with no rebound in site.  Winter ended, Spring has sprung, and the dog days of Summer have come and gone.  Fall is now in the air.  The curtain has yet to rise, and now, unless something major changes, the curtains and lights will stay low until the end of May, 2021 at the earliest.  That is something that no one could even fathom when the shutdown started in March.     When the curtains do rise again, what changes will us, the patron be subjected to?  Will there be a body temperature kiosk checking temperatures on the cue line outside?  Will it be in the lobby?  What if you want to buy a ticket in the theater or a souvenir?  Will there be a desktop body temperature kiosk there?  How about one at the concessions stand?  Now, you’re ready to go to your seat and you’ve touched so many things already.  Will the way to clean your hands be with a wireless hand sanitizer unit or a wall mounted hand sanitizer one?     Now the show is over.  One of the biggest parts of Broadway is waiting by the stage door at the end of the show to meet your favorite actor or actress.  What will the precautions be back there?  Will there even be a meet and greet allowed?  Will there be a body temperature kiosk there for all to use?  If so, who’s job would it be to make sure everyone indeed did get their temperature taken by the body temperature kiosk?  So many questions, no answers in sight. 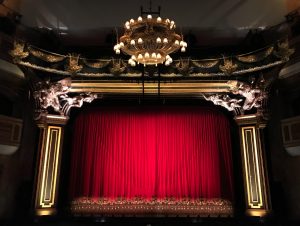 So the curtain stays down for now, but sooner or later, “The Great White Way” will be back, bigger, and brighter than ever.  The magic will be back, the suspense will be greater, and the excitement will be worthy of a curtain call that will last forever.